This latest blog comes courtesy of Mark and his team at West Bridgford Landscaping who used our X-Grid to create gravel parking areas for two different clients. One job was a small overflow area next to the main drive and the second job was a large gravel driveway.

Following a meeting with the first client, Mark began researching gravel driveway grids and soon came across our website & X-Grid. He read up on X-Grid’s many benefits such as; being able to withstand up to 420 tonnes per sqm, easy to install, permeable and UV & weather resistant before deciding it would be the best gravel grid to use.

Read on to see how both projects turned out! (You can follow the installations using the photos in this blog)

The first gravel driveway the team worked on was a small hard standing overflow area installed next to the main resin bound gravel drive they had also installed. The team ordered and used 12m² of X-Grid on this project.

The work started with the team digging up the old and worn concrete driveway. They then separated the main drive from the overflow area and the pavement by using bricks to create a border. From here, a sub-base was prepared on both the driveway and the overflow using sharp sand which was then levelled and compacted using a whacker plate.

With the sub-base finished, the X-Grid could be laid. Starting in one corner of the overflow driveway the team laid one panel at a time and simply connected each piece together as they went along using the slot and peg system. The process of laying one panel and connecting to neighbouring panels was repeated until all of the grid had been installed which took no time at all. The next step was to fill the X-Grid with granite chippings which again took very little time.

The final step was to install the resin bound gravel. This is done by mixing together washed and kiln-dried decorative aggregates and resin binder in a forced action mixer. The mixture is then spread evenly in the designated area before being precisely levelled using trowels before leaving to set for 24 hours.

Mark told us: “The X-Grid was very easy to work with. We installed the grids under a granite chipping to create an overflow area next to the drive. We’re very pleased with the work and this was our first 100% porous Driveway (both X-Grid and resin bound gravel). 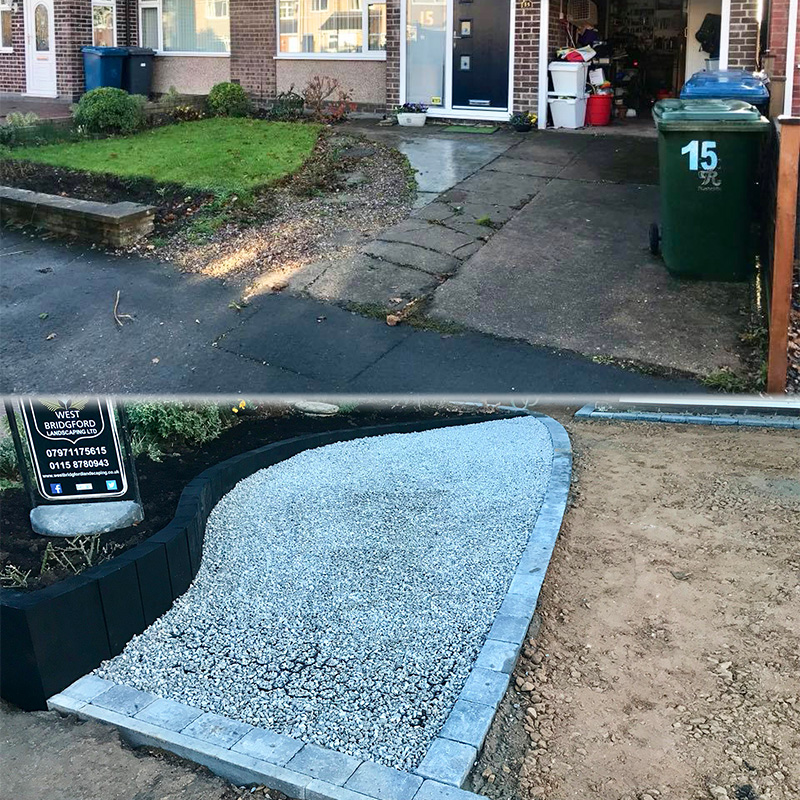 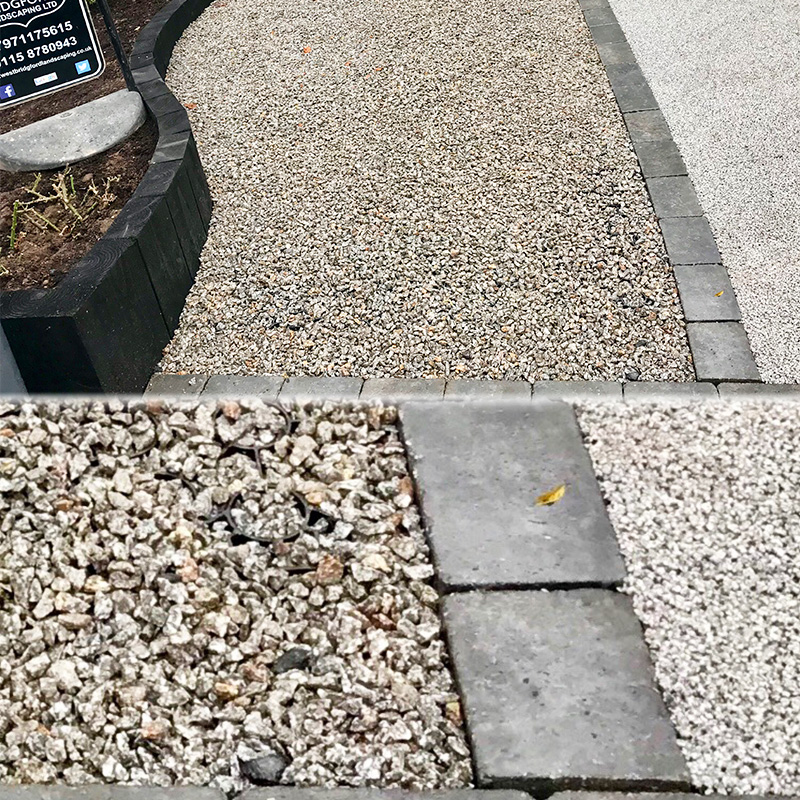 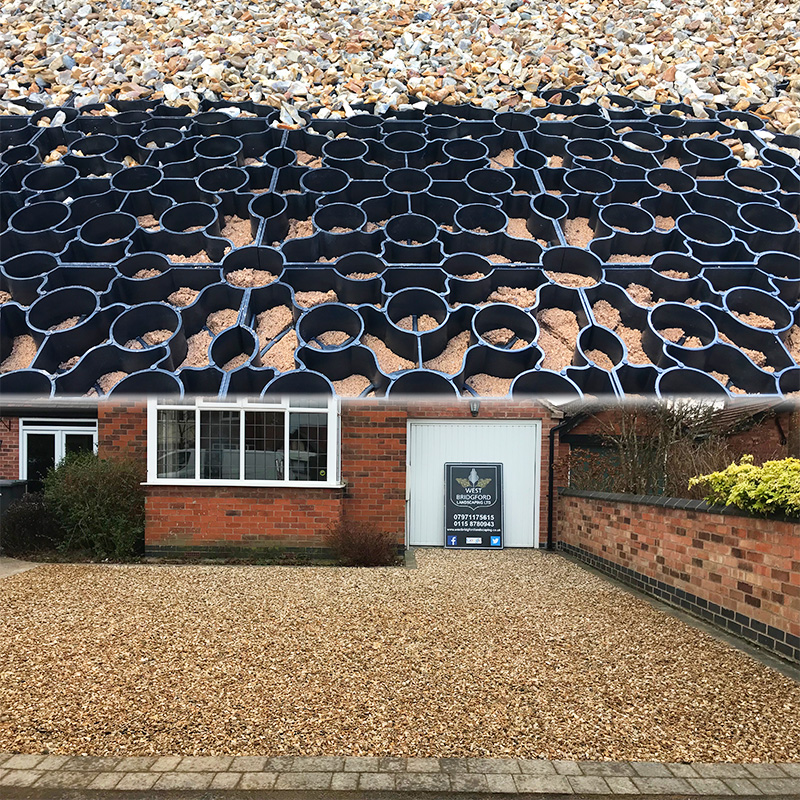 The second gravel driveway the team completed was a large project where they replaced the customers current drive with a permeable and decorative gravel drive. They ordered 55m² of X-Grid to use for this job.

The procedure for this project was similar to the previous one. Starting off with the team removing the clients current driveway but leaving the brick border in place. With the old drive removed, a solid and level sub-base was needed so sharp sand was laid and compacted down using a whacker plate.

On to the sub-base X-Grid was installed. Again starting in one corner and laying one panel at a time, they connected the neighbouring pieces together with the specially designed slot and peg system and repeated this until the full driveway was covered. Although it was a large area, the laying of the grid took no time at all. Finally, all that was left to do was to evenly fill all of the grid with golden flint gravel, we estimate that around 8kg of gravel is needed to fill each individual panel so you can roughly work out how much you will need to finish your entire project.

The work that has been carried out by Mark and his team is fantastic and both projects look amazing. We’re sure that their clients are delighted with the outcome of their gravel driveways.

Mark and his team are based in Rushcliffe and cover Nottingham and surrounding areas. The carry out all aspects of driveway and landscaping work such as gravel, resin & block paving driveways, patios, turfing and deck building as well as fencing work. For more information or to get in touch with the team, visit the West Bridgford Landscaping website. 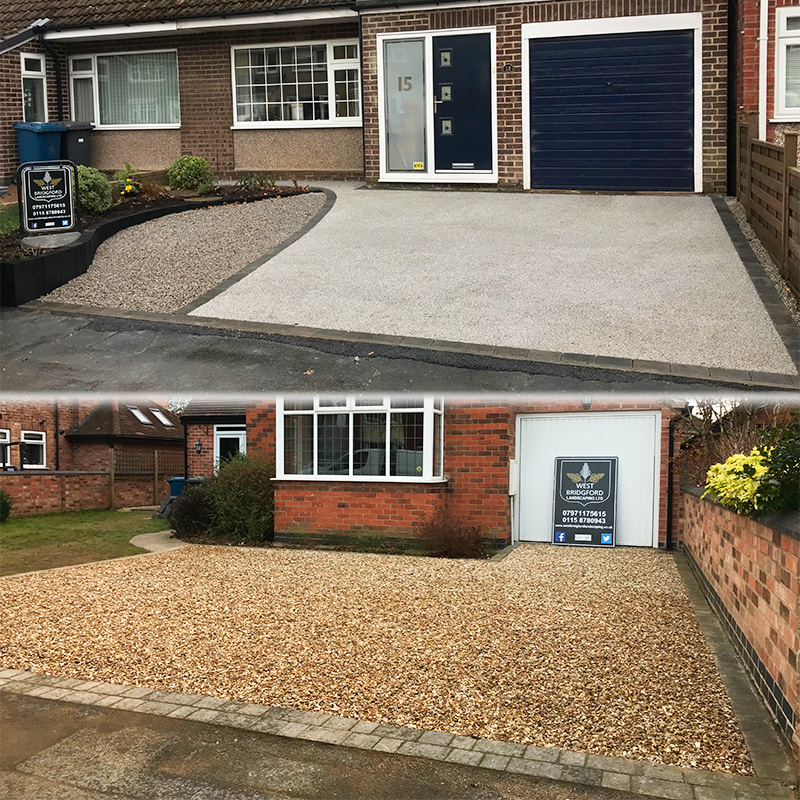 See how X-Grid can be used to create a strong, permeable and migration free grass or gravel motorhome or caravan parking space