Our latest case study comes from Dave who had been searching for a new Hot Tub for his garden. After researching a few local hot tub dealers and their current stock, he found The Hot Tub Barn and their RipTide Hot Tubs which he was very impressed with. After further research and viewing the hot tub, Dave ordered a RipTide Hot Tub. Once ordered he began to wonder what base would suit his mainly turf garden, read on to see what base he decided to use.

Dave decided to search for the internet to find a suitable foundation for his hot tub. After very little searching he came across our website and our fully recycled plastic bases which he began reading up on. After finding out that our bases are made from 100% recycled plastic waste, are easy to assemble and install, can hold up to 420 tonnes per sqm and are competitively priced he ordered a 7ft x 7ft Hot Tub Base along with 8 Non-Slip Rubber Tiles the same day!

Dave’s base arrived the next working day via DPD in an easy to manage parcel which he was able to easily move and store until the day of installation. 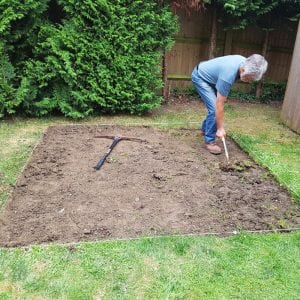 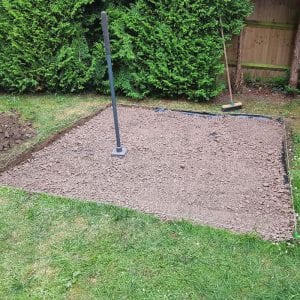 Once a dry day arrived, Dave decided to get his base out and get it installed. He started by measuring and marking out the area of the base using string before digging up all of the turf and soil inside the string lines which you can see from the photo above.

Once the area was clear and the removed soil had been disposed of responsibly, Dave could begin laying the sub-base on which our plastic base would stand. He laid a layer of gravel and compacted the entire area very well using a hand held compacting tool. This part of the project was the most labour intensive but almost all DIY’ers would be able to do it. With the full area covered and now a solid compact surface, the base could be installed.

Laying & Filling The Base

With the sub-base finished it was time for Dave to begin installing his base. Dave unpacked his parcel and began laying one panel at a time. Starting in one corner, Dave continued to lay one panel and then attach them together using the specially designed slot and peg system until the entire area was filled. It was by far the simplest and fastest part of the project he told us.

Dave then began filling the full area with gravel, around 8kg of gravel is needed to fill each panel so you can estimate how much gravel you will need for your base. This was again not hard but was a little more time consuming.

With the main base down, Dave then attached the 8 Non-Slip Rubber Tiles he had purchased, on which the Hot Tub Steps would stand and be surrounded by to ensure there is no chance of slipping once out of the spa. Overall a very simple installation! 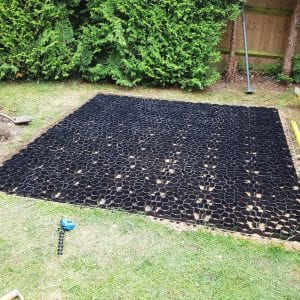 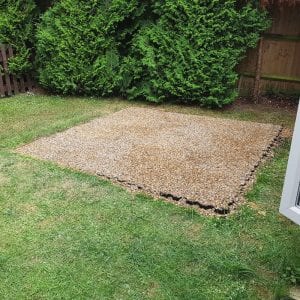 With his base now installed and finished all that was left to do was to wait for his Hot Tub to arrive. As with most Hot Tubs, Dave’s spa was crane lifted into his garden by a great team from the Hot Tub Barn. They helped get the tub in place and set it up before leaving. They help to set up hot tubs to ensure customers are able to use their hot tubs as soon as they can after a day or so of the spa running.

We agree that Dave’s base and new RipTide Hot Tub look great and we’re sure he and his family will have years and years of enjoyment and relaxation out of it.

Dave and his family are incredibly pleased with their new base and hot tub. The entire installation took just 5 hours to complete – so much faster and easier than laying and curing a concrete base.

A massive thank you to Dave for sending in the photos and information to allow us to create this case study. Should you have information or photos to share with us or have any questions regarding our products then please do not hesitate to contact us. 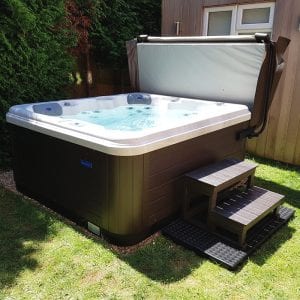 See how a past customer, Julian, used one of our plastic bases under his new hot tub

Garden Base Shed Base

This case study comes from Yvette and Andrew who were looking to replace their old rotting shed with a new one. As the old one had become worn, they wanted to ensure that the new garden building they bought would last for as long as possible: Yvette told us: “We decided we needed to replace […]