As seen in one of our other grass reinforcement mesh case study, this customer was struggling with their garden turf being damaged and unable to return to its natural state. To prevent further harm and to allow the grass to grow back, they began searching for a suitable solution to their problem. To find out how their issue was resolved, read on:

This case study is courtesy of Grace who was in need of a solution for her churned up grass issue. A member of her family uses a mobility scooter and regularly drove on the grass which had begun to take its toll on the turf. This is when Grace set about searching for a reinforcement product.

After searching the internet for a suitable product, she found our website and our grass reinforcement mesh. After reading up on our TurfMesh, Grace ordered our reinforcement mesh which enough u-pins to cover her entire garden. Her order was packaged and dispatched on the same day by our team. 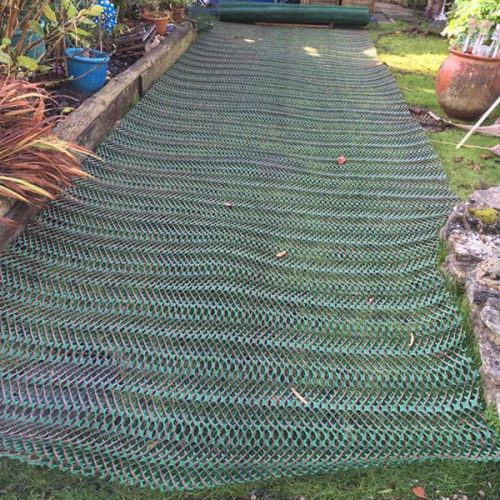 Grace received her roll of TurfMesh just a few days later. She stored the mesh until the following weekend when she was able to begin installing them on the garden.

As you can see from the photos in this blog, in Grace’s garden there are two large rock stepping stones which had to be taken into account when laying the grass reinforcement mesh. Grace rolled out her new mesh along the length of the garden and secured it in to the turf as she went along using the u-pins at just less than the 1 metre recommend intervals.

Grace told us how simple she had found the installation. To complete the project, she used a pair of strong scissors to cut the mesh around the shape of the rocks in her garden to keep them uncovered. With all of her turf now covered, all that was left to do was to wait for her grass to grow to restore the areas natural appearance. 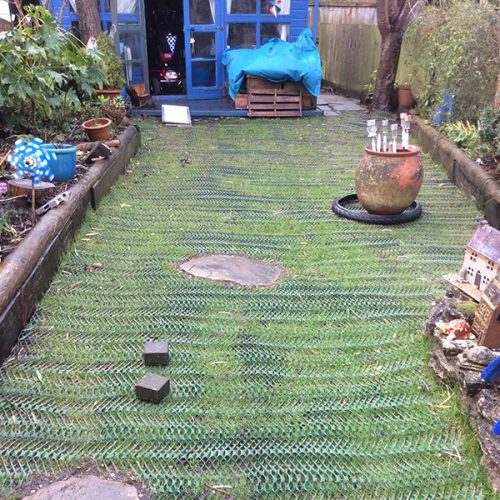 Grace is delighted with the outcome, the wheels of the mobility scooter no longer churn up her garden and she is hoping that by spring the grass will have grown fully through the mesh.

A big thank you to Grace for firstly choosing to use our mesh and secondly for allowing us to create this case study. We’re proud that our products can be used by almost anyone to solve a wide range of DIY and gardening issues.

Should you have any photos or information of your project to share or just have some questions regarding our products, then please do contact us. 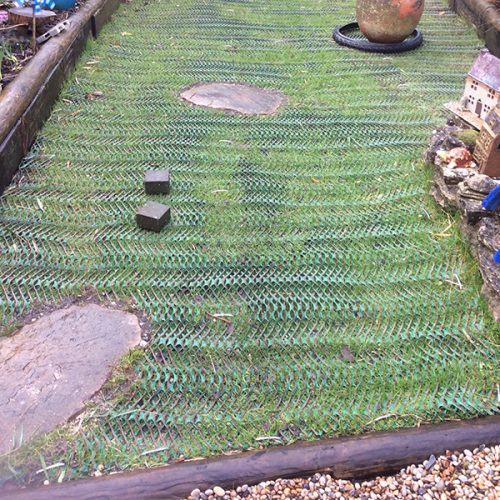 A case study from a past customer, Brian, who used our TurfMesh to create an access route to allow him to drive easily to his garage all year round