This case study comes from Matt who had recently purchased a brand new Lay-Z-Spa inflatable hottub which he was planning to set up in his back garden. Unfortunately, the ground where Matt had planned to put his hot tub was not suitable to support his blow up spa.

To solve this issue Matt turned to Google to help him find a suitable product on which he could stand his Lay-Z-Spa, read on to see what Matt decided to use:

After a little browsing, Matt came across our website and our fully recycled rubber inflatable hot tub base which he started reading up on. He found that our tiles were available in 3 colours, strong enough to hold his hot tub, easy to install thanks to its included interlocking pegs and have non-slip qualities which is great for use under a hot tub filled with water!

Matt was so impressed with the base that he ordered 16 Green Inflatable Hot Tub Base Tiles the same day. His order was dispatched and arrived at his home just 3 working days later.

Matt’s order was delivered via courier to his home in easy to manage boxes so he could store his tiles for as long as he needed or he could begin his installation straight away. 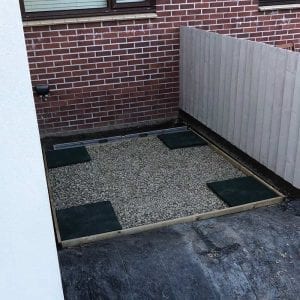 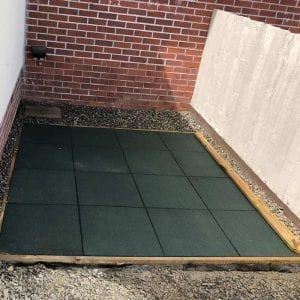 Matt began his installation by creating a level and strong sub-base which would support his hot tub tiles without sinking. He did this by laying a small layer of gravel and compacted it all down as well as he could.

With the ground prepared, Matt laid a sheet of membrane where the base would be installed and held it in place using bricks which he could removed once the install was complete. He then measured out the area of the base and put in place wooden planks to create a border to prevent the base from moving when walked or run on.

Next, Matt began installing his base. He laid one inflatable base tile at once and attached each neighbouring tile together using the interlocking pegs and repeated this until his base was complete. It was a simple yet effective process Matt told us.

Finally, with the tiles in place, Matt proceeded to place his hot tub mat and inflated Lay-Z-Spa on top of the rubber hot tub base. With his hot tub in position, filled with water and plugged in, Matt then covered the surround area around of the Lay-Z-Spa with a dark decorative gravel to add to the overall appearance of the installation.

All that was left to do was for Matt and his family to enjoy their Lay-Z-Spa hot tub!

Matt was and still is very pleased with his new Inflatable Hot Tub Base and Lay-Z-Spa! He now has a strong and non-slip base under his new spa where he can relax whenever he wants.

A huge thank you to Matt for using our Inflatable Hot Tub Base Tiles and for sharing the photos of his installation with us too. If you have any photos to share with us or have questions regarding any of our products then please do not hesitate to get in touch via the contact us page. 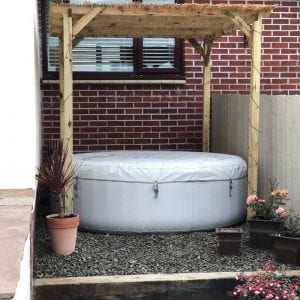