This case study comes from a customer, Julian, who after purchasing a second hand Hot Tub for his garden needed a suitable foundation for the spa. He wanted to find a strong, easy to install base that could be relocated should he want to or need to. Also, Julian decided that he would build a decking area and trellis around the hot tub once it had been installed for ease of use and more privacy. Read on to find out about the full project:

Once Julian had purchased his Hot Tub and the delivery date had been agreed, he began researching for a lightweight, easy to install yet strong base that would support his hot tub for years to come and could be easily relocated should he need to do so.

After reading up on our base and its fantastic benefits such as:

Julian decided this would be the ideal foundation and ordered his base which was delivered to him in easy to handle packages just 3 working days later. 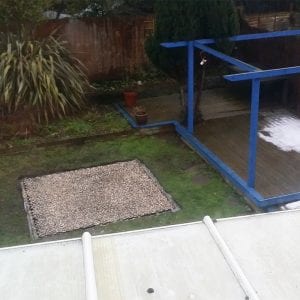 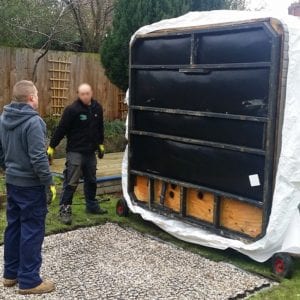 The following weekend Julian began his installation. He read the installation guide that comes with every Hot Tub Base order and set to work creating his foundation.

He began by deciding where his hot tub would be installed and marking out a 7ft x 7ft square on the turf so he knew the rough area where the turf would be dug out and where the base would be installed. Once marked out he started digging out the existing soil and turf to depth of around 70mm.

With the area now dug out and the removed soil disposed of, Julian began laying the sub-base. Our hot tub bases require a solid sub-base otherwise there is a risk that the base could sink into the soil below. He laid a small layer of hardcore and compacted it down as well as he could to ensure the entire area was covered and solid under foot.

On top of the sub-base, Julian began to install his fully recycled plastic hot tub base. He laid 4 panels at time as that is how they are packaged. Starting in one corner, he simply laid each section and connected the neighbouring panels together using the specially designed slot and peg system. The laying of his 7ft x 7ft base was a simple job, Julian told us.

With the base now laid, Julian began to fill the entire area with decorative gravel. Around 8kg of gravel is needed to fill each individual panel, so around 392kg of gravel was required from Julian to fill his entire base. Once filled, Julian had a solid, strong and permeable base ready for his new hot tub.

Finally, the delivery men arrived and checked the base before offloading the spa.

“The chaps who transported the hot tub came and checked that the base was acceptable before they would even take the hot tub off the truck. They were quite happy that the hot tub base was flat and capable of supporting the weight.”

They installed his hot tub in no time so Julian and his family could begin relaxing as soon as the tub was set up!

A huge thank you to Julian for sharing the images and information he did to allow us to create this case study. We agree that his new hot tub looks great in his garden!

Julian told us “Installation was so much easier than having to pour concrete and has the advantage that it can be reused if I ever need to move the tub. Obviously the hot tub is very heavy and even more so when filled with water/people, so the base that it sits on has to be very strong, flat and completely solid. The base is doing it’s job well and I haven’t had any issues.”