This case study comes from a past customer, Steve. After ordering a new Hotspot® Hotspring® Hot Tub from Northern Spa Outlet in Southport, he began wondering where he could stand his new spa.

He realised that the far end of his decking had been slightly neglected over the past few years, so he decided he would cut out part of the decking and install his hot tub below the decking. Read on to see exactly how Steve did so: 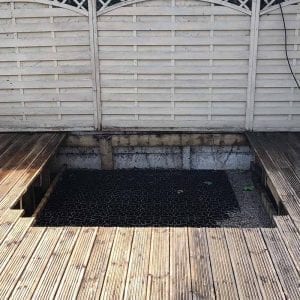 Steve knew that the existing floor under the decking would not be suitable to support and prolong the life of his hot tub, thus began his search for a strong base that would reduce the possibility of rot occurring to his spa whilst it is under the decking. Steve researched online for a suitable product to meet his needs and after a little browsing came across our strong, permeable and easy to lay plastic hot tub base.

After reading up on its many benefits and comparing it to other inferior products he had found, Steve ordered an 8ft x 8ft Hot Tub Base. His order was processed & dispatched the same day and arrived at his home via DPD the very next day ready to be installed.

Steve began his project with the decking. Firstly, He removed the current furniture and decorations that were at the end of the decking. Secondly, he measured and marked out the hot tubs dimensions on the deck, this left him with an outline that he could cut around to make space for his hot tub. Next, he followed his markings and cut out a large part of his decking. This left the now redundant decking supports and a useful membrane exposed.

Steve ensured the membrane was not split and could still be used before starting work on his base. He reused the removed supports to create a border around where his base would be stood to ensure there would be no movement once the hot tub was installed.

With the borders in place, he began laying his plastic hot tub base. Steve started in one corner and laid one panel at a time, he connected each base panel together as he went along using the specially designed slot and peg system. This procedure was repeated until the entire area was covered and Steve told us how quick and efficient this process was.

Once the entire base was installed, Steve began filling the area with 10mm gravel. Our estimate is that around 8kg of gravel is required to fill each hot tub base panel, so for Steve to fill his full base, around 512kg of gravel would be needed.

With his base now installed and filled with gravel, all that was left to do was for Northern Spa’s to install Steve’s new hottub and for him to begin enjoying the fruits of his labour! 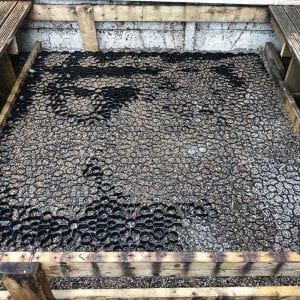 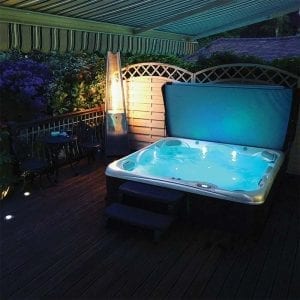 A massive thank you to Steve for sharing the images and information of his project with us so we could create this case study. We agree his new hottub and surrounding decking area look fantastic!

Steve told us: “Your hottub base was very easy to install, it provided a level and stable foundation for my hot tub. I have recommended your product to the hot tub supplier and also to some friends who could utilise your product for their spas or other projects.”

If you have photos of your installation to share with us or have any questions regarding our bases then please do not hesitate to contact us.

12ft x 6ft Plastic Base Under A Self Built Summerhouse

Buying a shed can be the most exciting of times, but a few months later when the very predictable wet British weather has had its way with your shed, where does all that moisture go? With more common concrete or stone slab approaches to shed bases, the moisture is soaked up by your shed. This […]

The Greenhouse Base Extension

That’s right! We have a sequel to “Greenhouse Base Customer Review”. Who would have thought that? If you haven’t read the first one already scroll down and have a read. If you have, come and see what Mike has done this time to improve his already brilliant Greenhouse. Well, spoiler alert; it’s bigger by the […]