With a large number of Hot Tub and Spa suppliers out there it can be incredibly difficult to decide which one is right for you. Do you go with price, number of seats, the company or the name you like most? Although choosing your hot tub can be hard, choosing your base doesn’t have to be the same. Our base is strong, permeable and not to mention incredibly simple to install. Unlike the more traditional methods of concrete or decking which can break, lead to rotting and can be very labour intensive it is a simple choice to make. Carl was looking for a base in this case study, read on to see what he chose;

Carl and his family had recently decided to buy themselves a brand new hot tub. After a few weeks of searching around they decided to order a Canadian Spa Company Hot Tub. With their spa almost immediately available they needed a base laying as soon as possible. Thus began Carl’s search for a suitable base, he considered concrete or a company hot tub mat/stand before he found our website. There he found our fully recycled plastic hot tub base, able to withstand up to 420 tonnes per square meter, permeable and also easy to lay. With these benefits on offer Carl ordered a 7ft x 5ft Hot Tub Base (35 Panels) the same day he found our website. He received his base 3 working days later in an easy to manage box which he could move and store until installation day.

Read on to see how Carl installed our base; 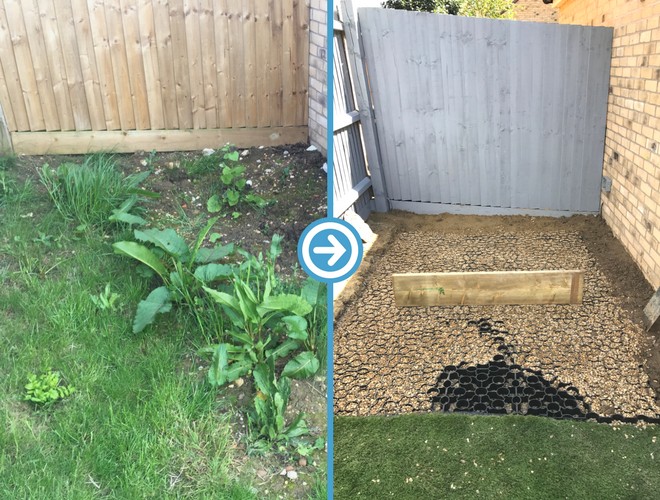 Carl began his project by planning out where he wanted his hot tub to stand. He ideally wanted an enclosed space where the hot tub would be protected from wind and rain. He decided it would sit in a little cove between the fence and side of the house where very little wind could reach the spa and he was to install a material roof over the hot tub by attaching it from the top of the fence to the roof.

From here Carl began preparing the ground to install the base, he started by removing all of the existing turf and digging down to depth of around 80mm. This gave him a ‘hole’ in which the base will be installed and sit flush with the rest of the garden. In the ‘hole’ Carl laid a layer of Hot Tub Membrane which is used to allow water to drain away naturally whilst acting as a shield against any weeds or plants trying to grow up and through the base. He secured the sheet into the ground using Hot Tub Membrane Staples to ensure there was no movement when the base was installed.

On top of the membrane Carl began installing our fully recycled plastic base. He installed the panels one at a time and simply attached them together as he went along by using the specially designed slot and peg system. This was by far the quickest part of the entire project. Once the base was installed he began filling the panels with decorative gravel, around 8kg of gravel is needed to fill each individual panel.

With the base now installed and secure, Carl’s new Canadian Spa Company Hot Tub was installed!

Finally, all that was left to do before he could relax was to build a decking system around the hot tub using locally bought timber and install the material roof mentioned earlier. 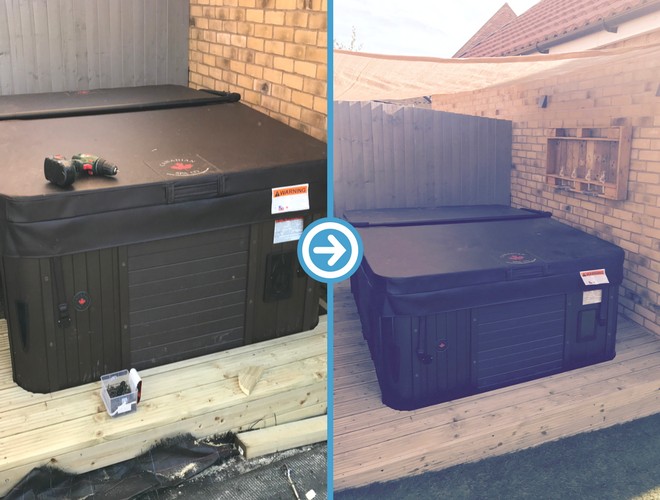 Carl was and still is incredibly pleased with how his project has turned out. He now has a strong and permeable base that was far easier, quicker and cheaper to install than a concrete base. Not only that but he has transformed that area of his garden from a blank space to an exciting decked area with a fantastic Hot Tub where we’re sure he will spend a lot of his time!

A big thank you to Carl for the fantastic images and information he sent in to enable us to create this case study. Should you have any images to share with us or any questions regarding our products then please do contact us. 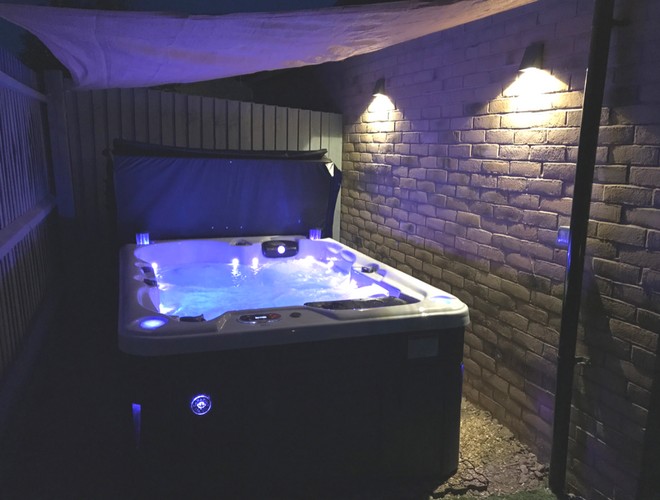 With the recent heatwave that took the UK completely by surprise, there is no better time to be sorting out your garden. Whether that be planting some flowers, a little landscaping or installing a new shed or greenhouse. The slight drop in temperature means you can get any hard work done without having to stop […]

Can A Plastic Shed Base Be Installed Directly Onto Concrete?

A very common question that we asked her at the Shed Base Company: “Can I install my plastic shed base directly on top of my existing concrete flooring?” To answer simply, yes. In this article we will be going over why you can install your fully recycled plastic base on top of your existing floor […]