Michael got in touch with us after ordering himself a very large shed. He had at first looked at laying concrete slabs and was searching the internet for prices and possible alternatives which is when he found our website. He began browsing and decided to use our fully recycled plastic base instead of concrete. Michael said; “The ground was terribly uneven and as the shed is so big I decided on putting down slabs. I was ‘googling’ best prices  and then decided to search for other options and came across your website.” Michael ordered a 12ft x 6ft Plastic Shed Base and a 10ft x 6ft Plastic Shed Base the same day he found us. He received his bases 3 working days later in easy to manage boxes that could be easily moved and stored until installation day. 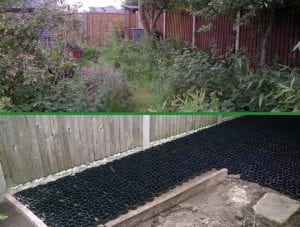 Michael began his work by completely clearing out the old area, which as you can see from the photo above was slightly overgrown and in need of some work. Michael removed almost all of the bushes and was left with fresh soil on which he began his base installation. There was lots of levelling to do due to the ground being very uneven. Once he had ensured the ground was suitable to lay the base he began installing the panels one at a time. Starting in one corner he laid each panel and attached them together as he went along, using the specially designed Slot and Peg system. This was by far the easiest part of the project Michael told us. He told us; “The attached photos show the state of the garden when I decided to take the project on and then the progression through to the finished article. You can see the outline of the plastic base which is the footprint of the shed. It is 18ft long and creates an “L” shape.” Once the base was installed Michael filled the entire area with 10mm pea gravel to give the area a solid finish and potentially cover up any small areas that weren’t quite level. 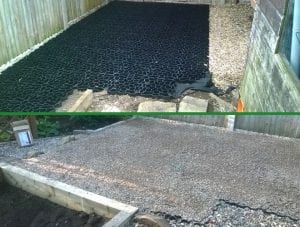 Michael was and still is incredibly pleased with how the project turned out. We think and are sure you will agree Michael has done a fantastic job transforming his garden! Michael told us; “The fact the plastic squares are lightweight and easy to handle was the reasons I bought these. Initially, I was going to fill the edge squares with 10mm pea gravel but the tonne I ordered filled all of the areas and gave a really solid finish and covered up some flat spots where my ground levelling had not been great! Yes, would use it again in the future as I have another project involving a Summer house!” A huge thank you to Michael for the images and information he shared with us so we could create this case study. Should you have any photos to share with us or any questions regarding our products then do contact us.

With the recent heatwave that took the UK completely by surprise, there is no better time to be sorting out your garden. Whether that be planting some flowers, a little landscaping or installing a new shed or greenhouse. The slight drop in temperature means you can get any hard work done without having to stop […]

12ft x 6ft Plastic Base Under A Self Built Summerhouse

Buying a shed can be the most exciting of times, but a few months later when the very predictable wet British weather has had its way with your shed, where does all that moisture go? With more common concrete or stone slab approaches to shed bases, the moisture is soaked up by your shed. This […]