Skip to content
This case study comes from Patrick who had recently discovered that the decking on which he used to stand his Hot Spring Hot Tub had badly rotted and needed replacing as soon as possible to ensure there would be no lasting damage to his hottub. Patrick decided he wanted his new base to would be rot resistant and allow water to drain away naturally, read on to see which base he decided to use:

Patrick began researching online to find a strong, easy to install, permeable and rot resistant base onto which he would stand his hot tub. He soon came across our website and our range of fully recycled plastic hot tub bases.

After reading up on its many benefits including the previously mentioned ones, he ordered an 8ft x 8ft Hot Tub Base the same day which was dispatched the next working day and delivered just a few days later via DPD to his home. 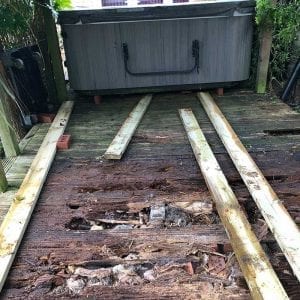 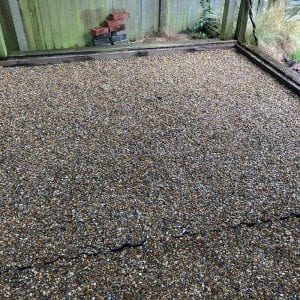 With the base delivered in easy to manage boxes to his home, Patrick was able to easily store his base until he was ready to install it.

To begin his project, Patrick had to remove the old rotten decking and dispose of it. The removed decking left an exposed ground with lots of rubble and pieces of the rotten deck. Patrick had to then remove all of the debris and began to level the existing ground. He levelled and compacted the area as well as he could using hardcore in appropriate areas to ensure his new hottub base would have a solid sub-base on which to stand.

From here he began to install his 8ft x 8ft plastic hot tub base, Patrick told us how simple the base was to install. He started in one corner and connected each panel together as he went along using the slot and peg system designed for easy installation. He repeated this process until his 8ft x 8ft area was covered with his new base.

With his new base in place, Patrick began to fill his new base with his chosen decorative gravel (around 8kg of gravel is needed to fill each individual panel) which again was simple to do. Finally, Patrick was able to slide his hot tub on to its new foundation and begin replacing his decking system.

Patrick was and still is delighted with his new hottub base and decking area! We agree it looks fantastic and would like to thank him for sending in the images and information to allow us to create this case study.

Patrick told us this about his experience: “This was a quick and simple DIY base which was a doddle to fit. Old decking was completely rotten under the tub so I wanted a new base which would allow the water to drain away.  So simple to install, these panels give you quick, simple and effective base which I am delighted with and thoroughly recommend.”

If you have any photos of your project to share with us or have any questions regarding our products then please do not hesitate to contact us. 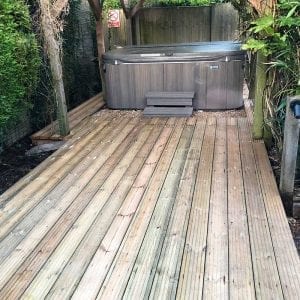 Wooden Shed Bases – A Thing of the Past?

This case study comes from Mike who was looking to relocate his wooden shed from one side of his garden to the other. As he already had a concrete base and knew how much work and waiting would be involved using concrete again, Mike decided to use an alternative shed foundation that would be strong, […]

This case study comes from a customer, David, who had recently received an almost brand new shed from a work friend. His friend had recently purchased the shed from Ransoms Garden Centre in Jersey. However not long after installing his shed in his garden, David moved house and decided to take his shed with him. After […]