This latest case study comes courtesy of Jon. Having recently purchased a new Hot Tub from The Combined Shipping Company,  he began thinking where in his garden he would stand his new spa.

After a little deliberation Jon decided he would install his hot tub in the middle of his patch of decking, however there was a chance that the decking may not be able to support the spa for years to come. So instead, Jon chose to cut out part of the decking and buy a suitable base to install in the newly formed hole in the decking and on which to stand his spa.

Read on to see which product Jon decided to use as his base:

Choosing A Hot Tub Base

Jon began researching online for Hot Tub Bases which he could install himself. He decided against using concrete or paving as both would be labour intensive and may be difficult for him to lay in such a specific area in the middle of his deck without spilling some on his deck.

Jon soon came across our website and our strong, easy to install and fully recycled plastic hot tub bases. After reading up on the bases and their many benefits including the ones just mentioned, he ordered a 6ft x 6ft Hot Tub Base. His order was dispatched the next working day and arrived at his home the following day in two easy to manage packages ready to be unpacked and installed. 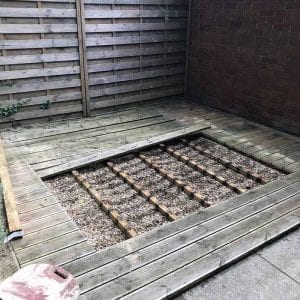 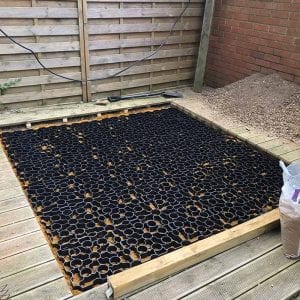 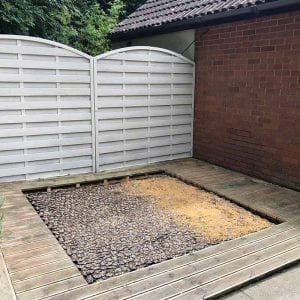 Installing A Hot Tub Base

Jon started his installation the following weekend. He began by measuring and marking out his 6ft x 6ft area in his predetermined spot on the decking where his hot tub would stand. From here, he cut the decking boards along the marked out lines until the area was clear. With the top boards removed, the support beams were next to be taken out leaving a gravel ground exposed.

Jon had laid a sheet of membrane under the gravel when he first installed his decking so one was not required with installing his base. Membrane is used to act a separation to prevent any weeds from below growing up and reaching your hot tub whilst still allowing water to drain away naturally.

On top of the membrane and gravel Jon then laid a small layer of sharp sand which he equally spread out and levelled as well as he could. With the sand compact and level Jon could then start laying his hot tub base. Starting in one corner, Jon laid one panel at a time simply connected each neighbouring piece together as he went along using the specially designed slot and peg system. This was repeated until the entire base had been installed which took no time at all.

Next, Jon filled his base with gravel. We recommend that around 8kg of gravel is required per panel so you can work out roughly how much gravel you will need for your base.

Finally, all that was left to do was to have his hot tub, delivered, installed and set up before beginning to enjoy his new spa!

A big thank you to Jon for sharing the photos and details of his installation to allow us to create this case study. Jon is very pleased with his new hot tub and base. He is very impressed with his new foundation and how simple it was to install.

Jon told us: “I am very pleased with the entire project. We bought our hot tub from Combined Shipping Ltd and the base from yourselves. Everything went very smoothly and I am delighted with the outcome!”

If you have images of your installation to share with us or have any questions regarding our products then please do not hesitate to contact us. 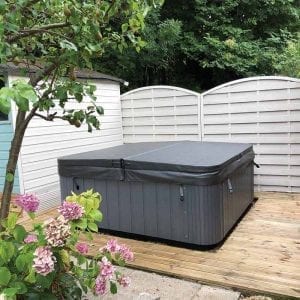 Garden Base Shed Base

Our latest case study comes from Renovation Bay-Bee who used our 12ft x 10ft Plastic Shed Base as the foundation to her new Waltons Garden Shed. In this blog, we are going to follow Stephanie and her process she took in order to install her one hundred percent recycled plastic shed base. You can also […]